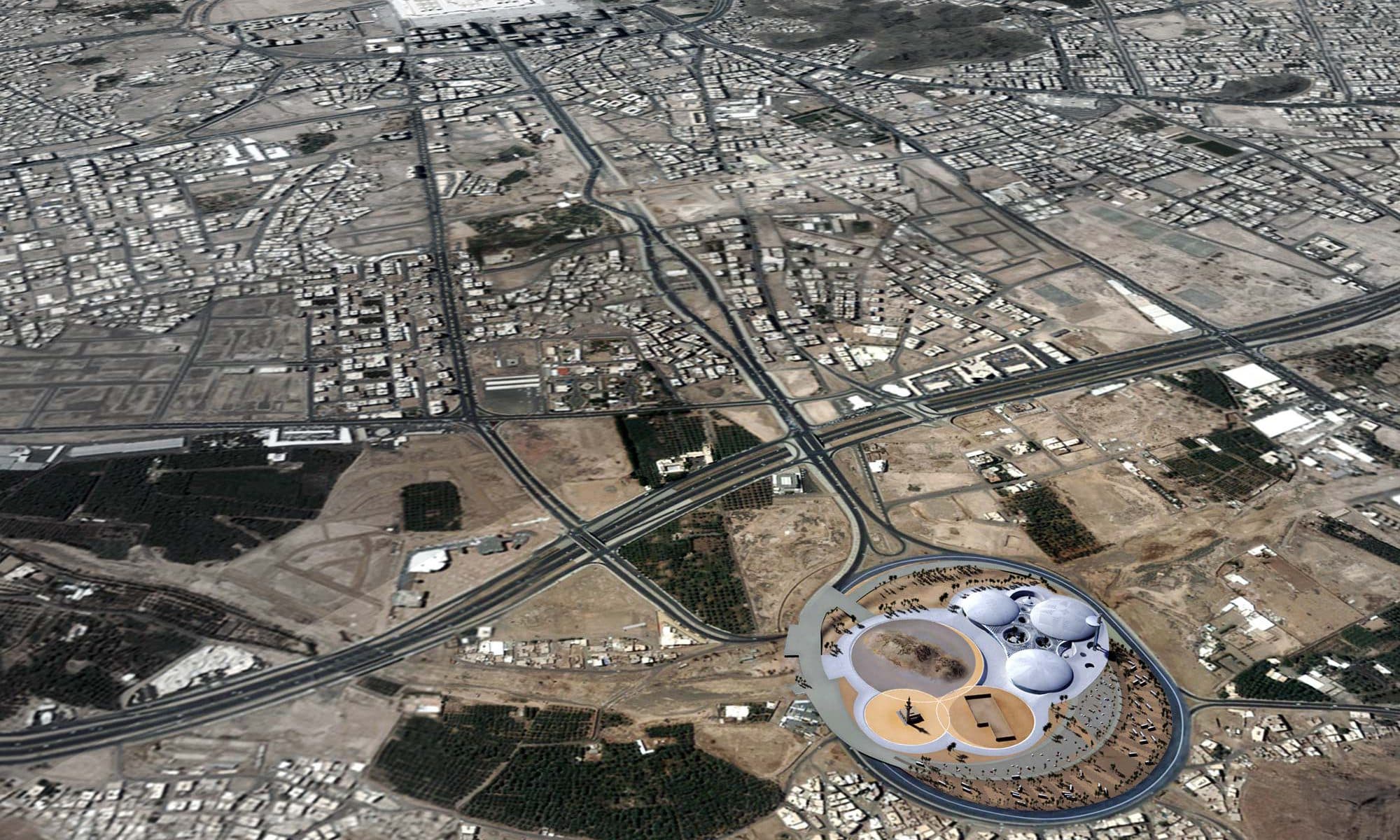 Located 2.5 miles north of the Prophet’s Mosque is the site of the Battle of Uhud, a place of great historical significance where important events occurred that marked the development of Islamic religion and culture. The site is visited each year by millions of pilgrims from around the world who come to visit these Holy Sites.

With a perimeter in the form of a ring road covering an area of 250,000 m2, it is a perfect site for developing a proposal that uses architecture to specify the conditions of collectivity, ambition and self-improvement that are most common to man and have survived the passage of time.

The place comprises a series of elements that give meaning to the whole.

The site is home to the cemetery of the martyrs who fell in the battle of Uhud, the mountain where the archers led by the Prophet stood, and the place where the Prophet was wounded. The design seeks to showcase the site-specific elements by inscribing them within a circle that delimits and identifies them.

Three large circles buried and separated from each other form the spaces of the three museums: the Museum of the Battle of Uhud, the Museum of the Prophet Muhammad and the Museum of Medina City. Authentic centres of visual gravity have been established by understanding the circle as perfect, universal geometry, capable of housing the exhibition spaces within it and simultaneously forming the domes that will protect the museum contents. Two large pedestrian ramps have been created to separate and control visitor access flows by leaving a gap between the circles of the Holy Sites and museums.

The strategy of sinking the museum platform provides two main benefits: first, as natural protection from the weather and, second, to generate visual perspectives of the Holy Sites at all times and from all possible points in the complex.

The service areas and central plaza have been formed by intersecting two smaller circles. The museum area depression has been formed by a gentle slope of white marble covered with a small sheet of water inscribed with verses from the Qur'an on its slope. The sheet refreshes and reflects the interior environment and the inscriptions generate a gentle murmur of falling water. A car park in the northern part of the site provides the necessary parking space for the complex.

The space between the museums is used for transit and exchange. The palm oases formed by the roof blur the boundaries between indoors and outdoors. A large anteroom that acts as a waiting room with the possibility of multiple activities.

Timeless architecture to accompany visitors in the exercise of looking back and understanding history in order to better understand ourselves. 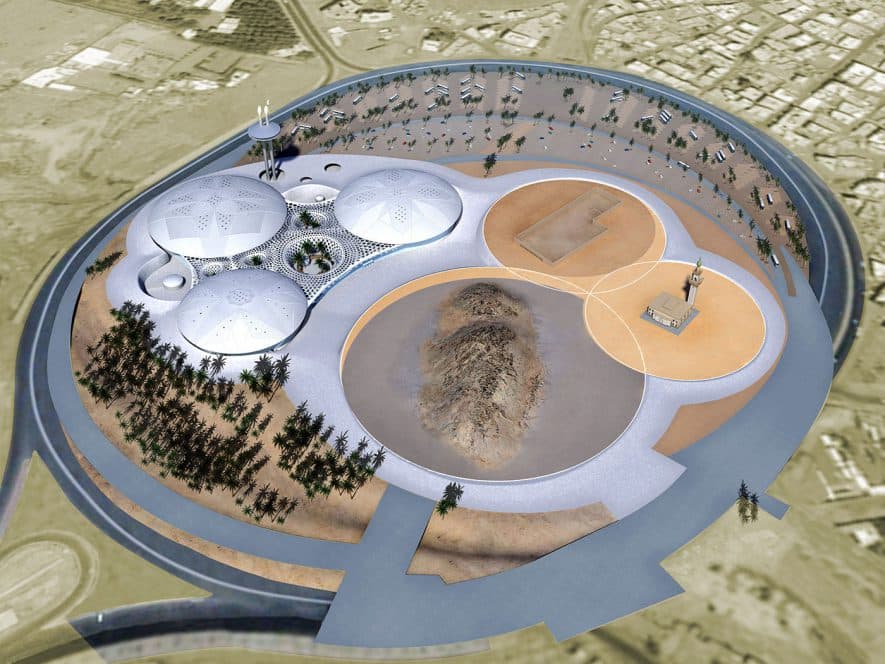 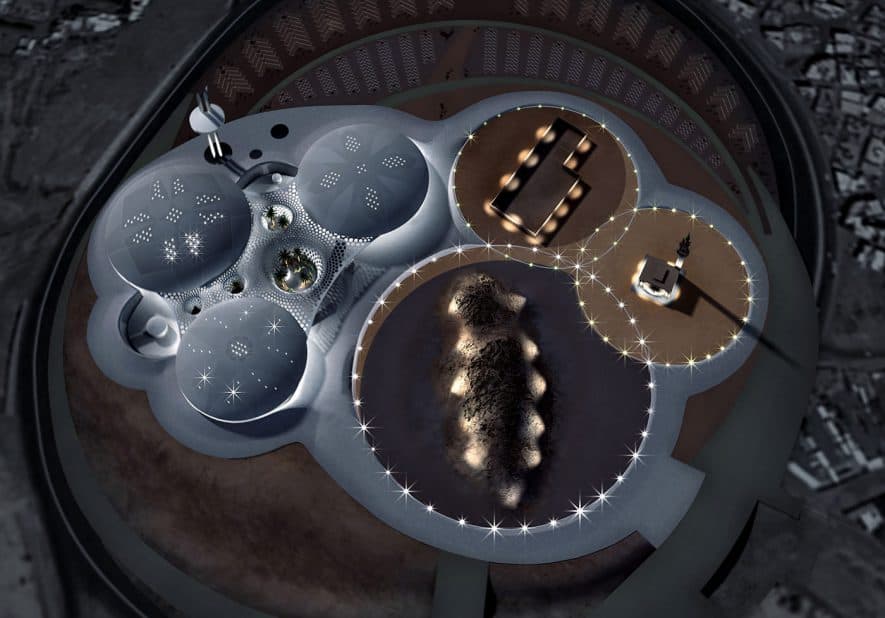 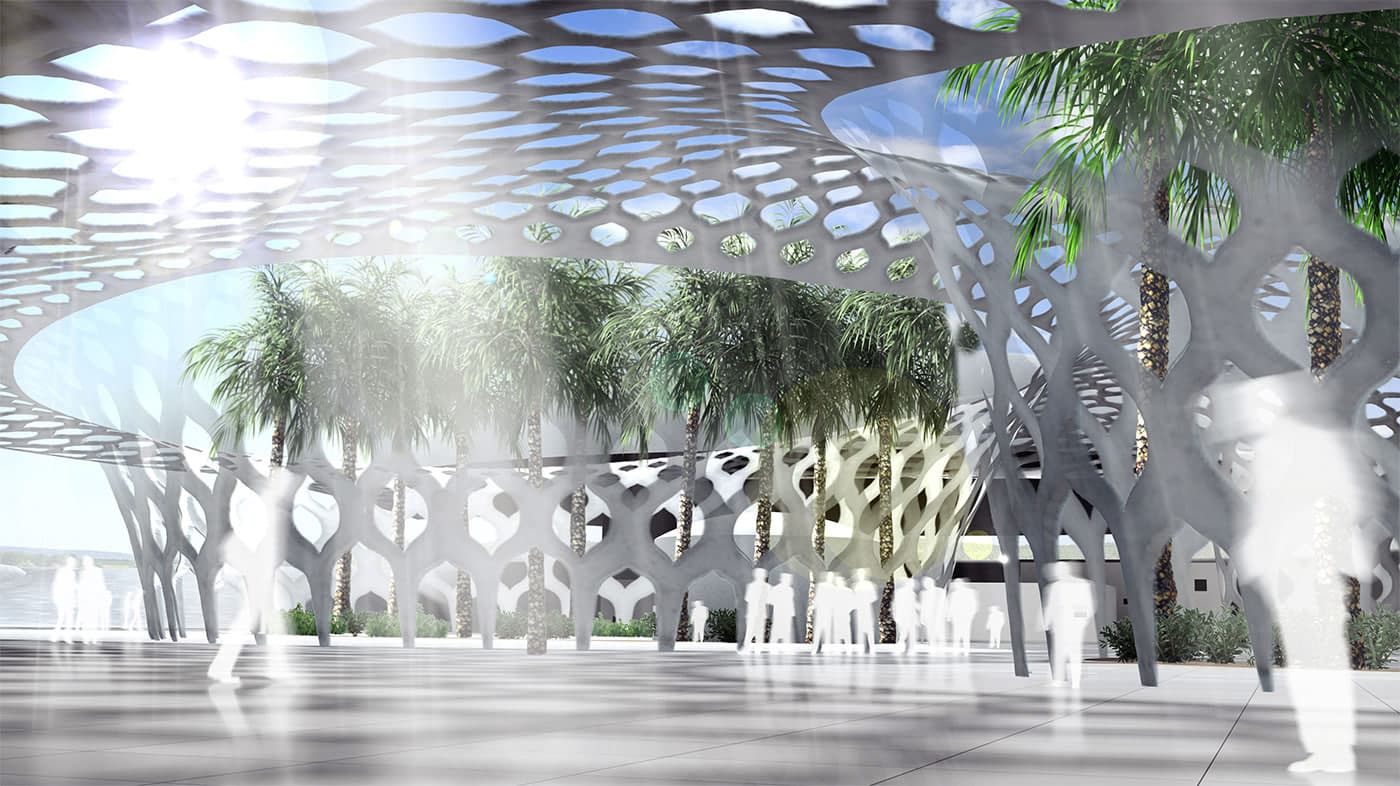 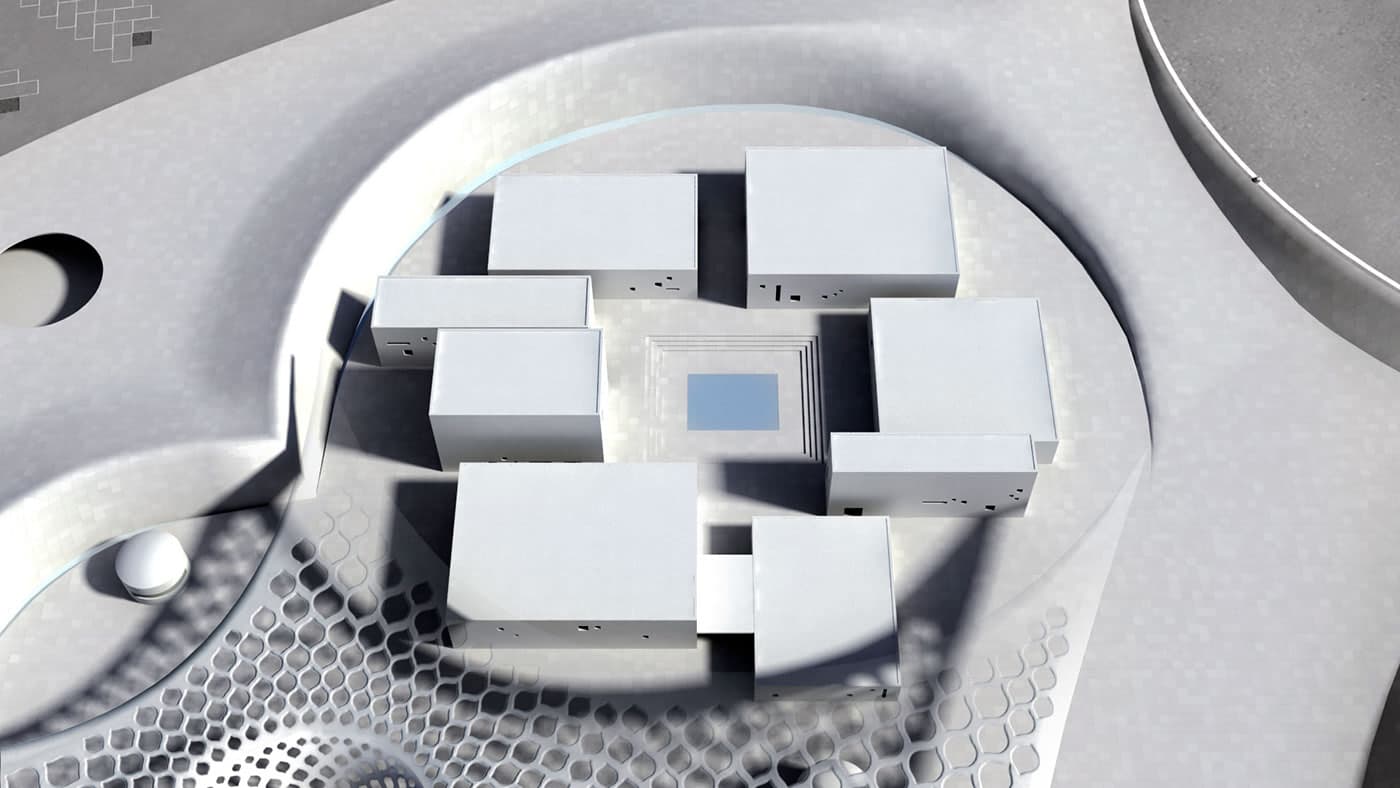 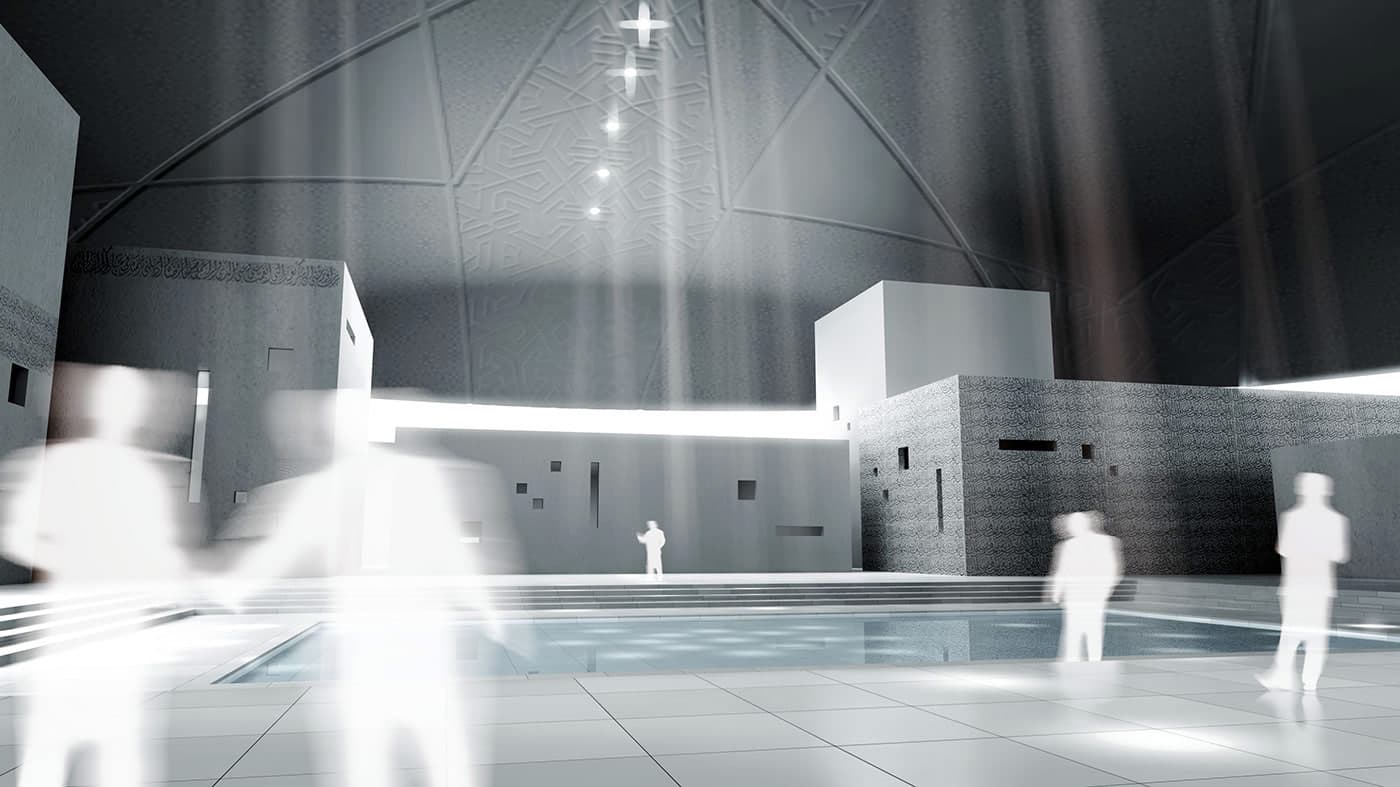 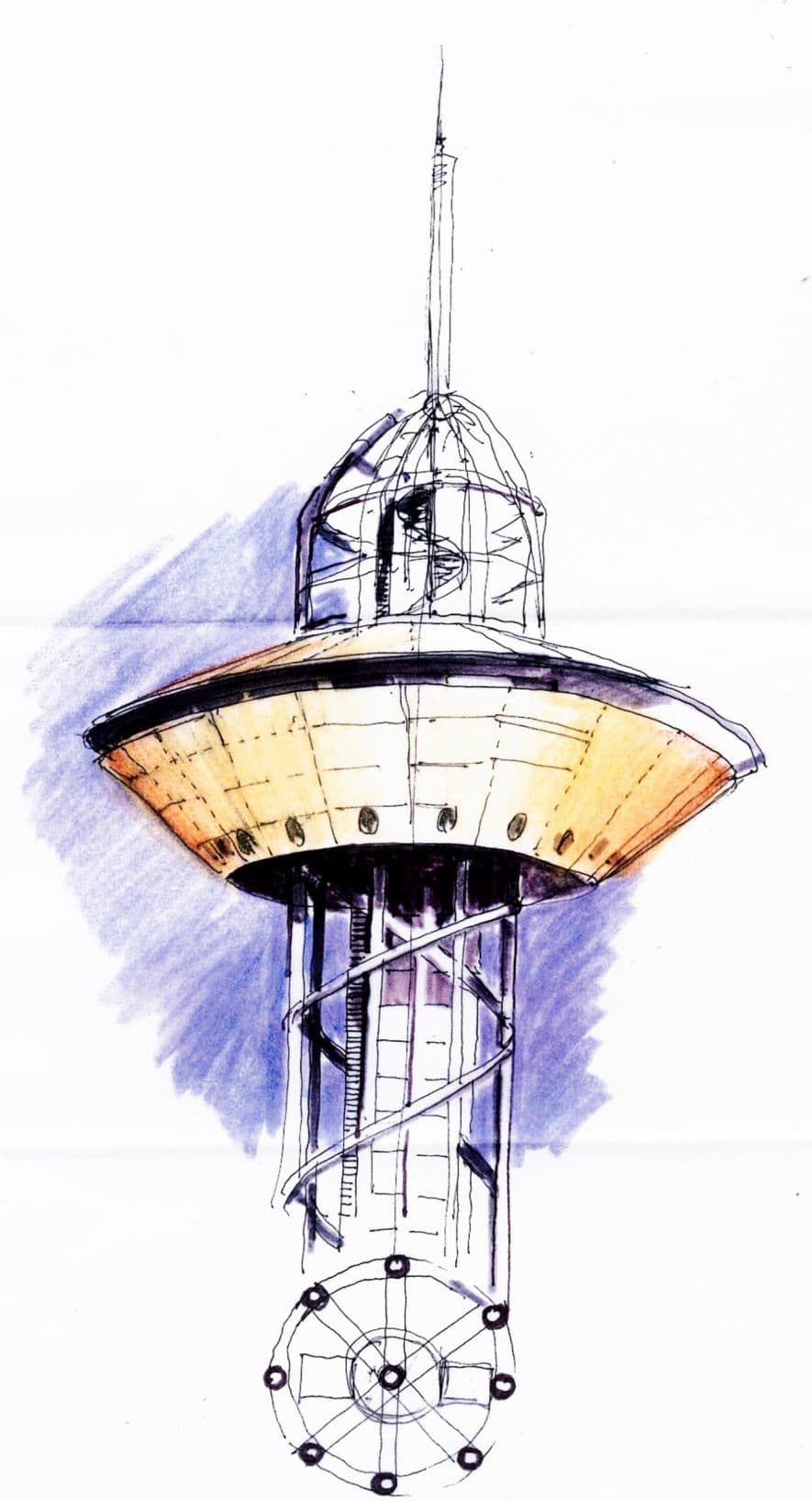 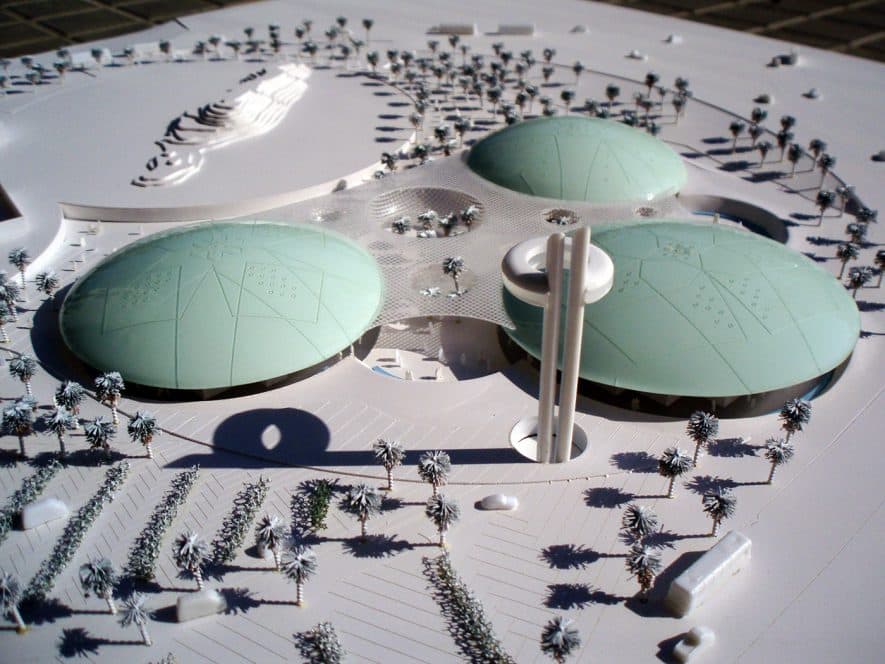 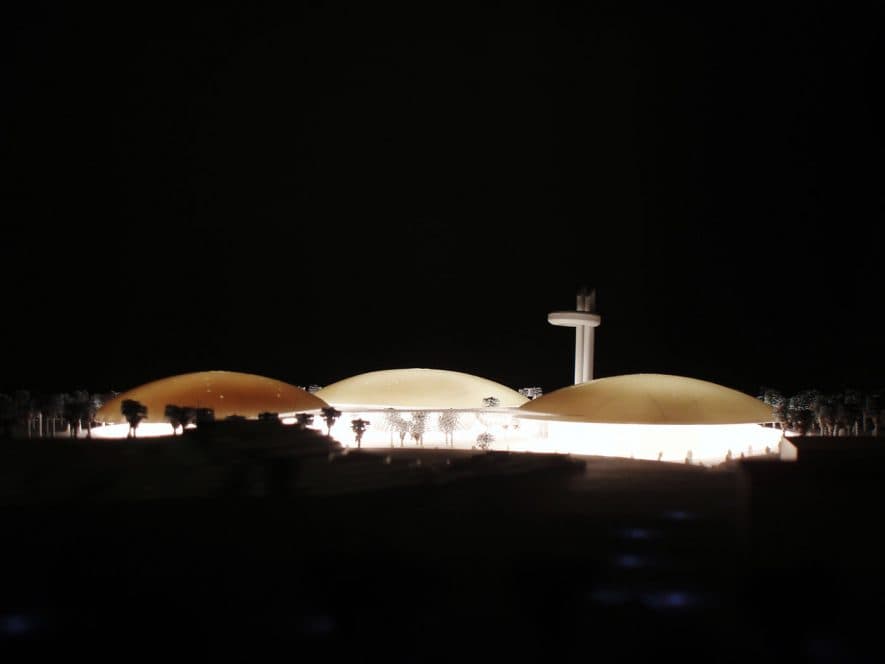 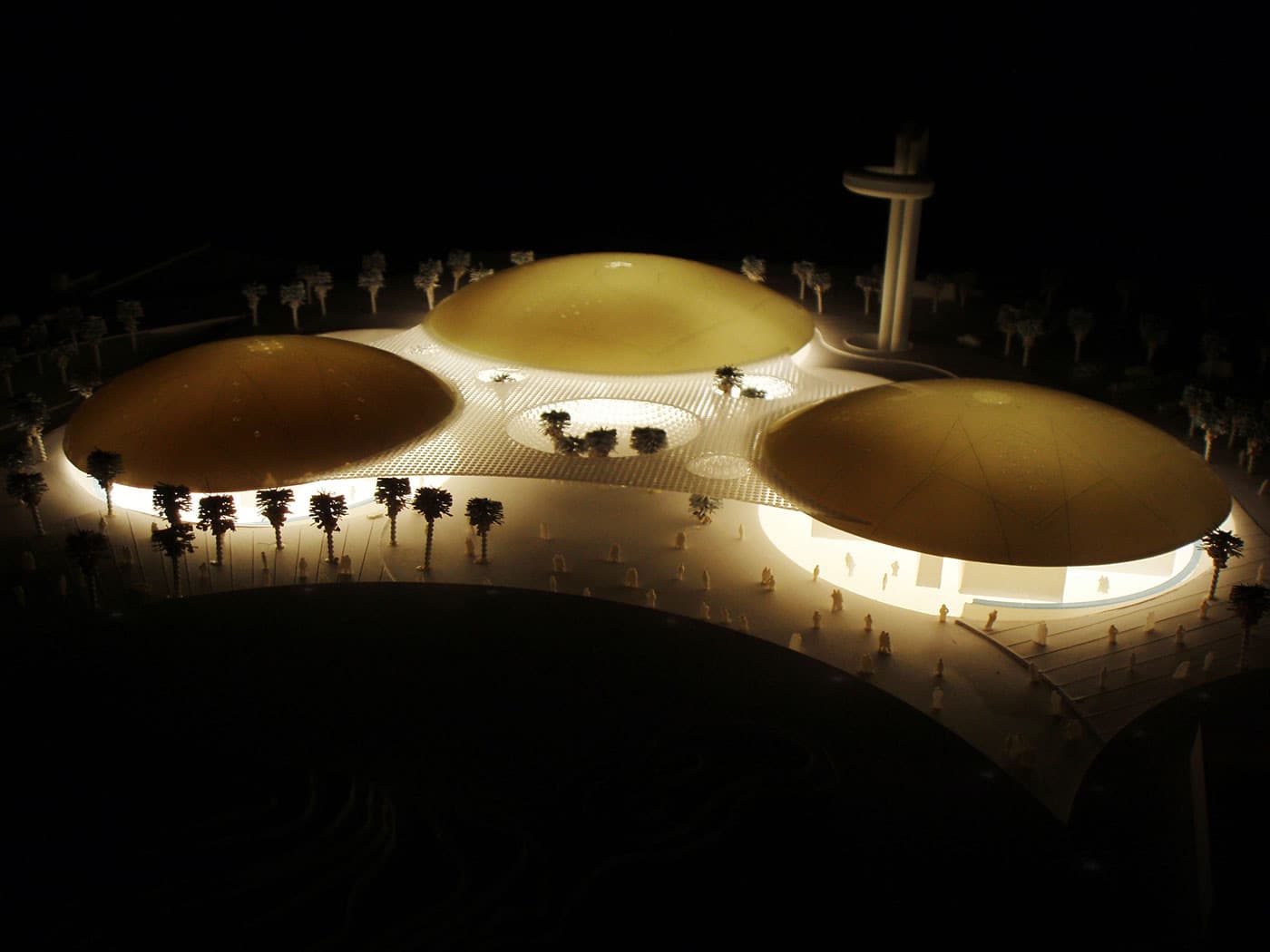 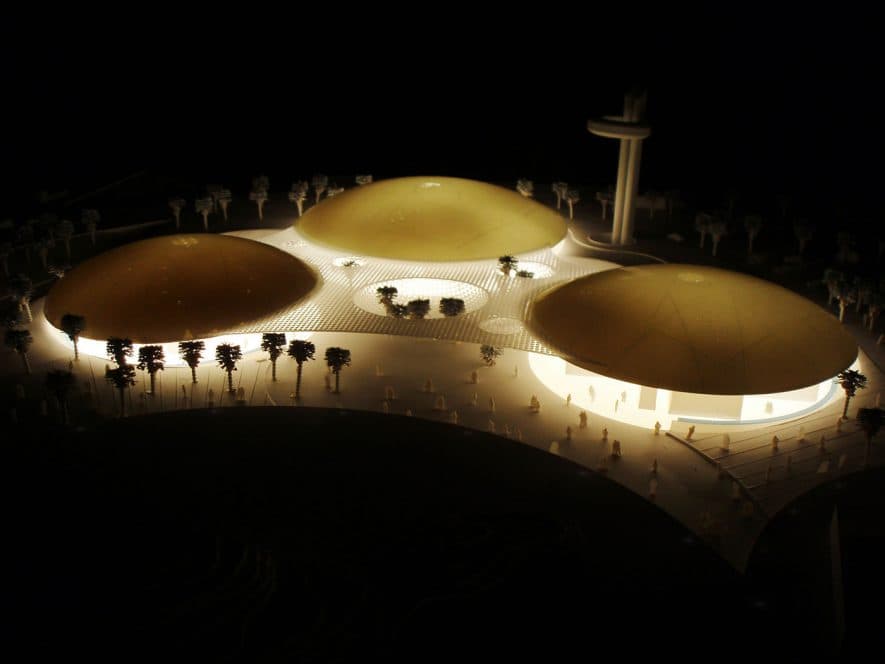 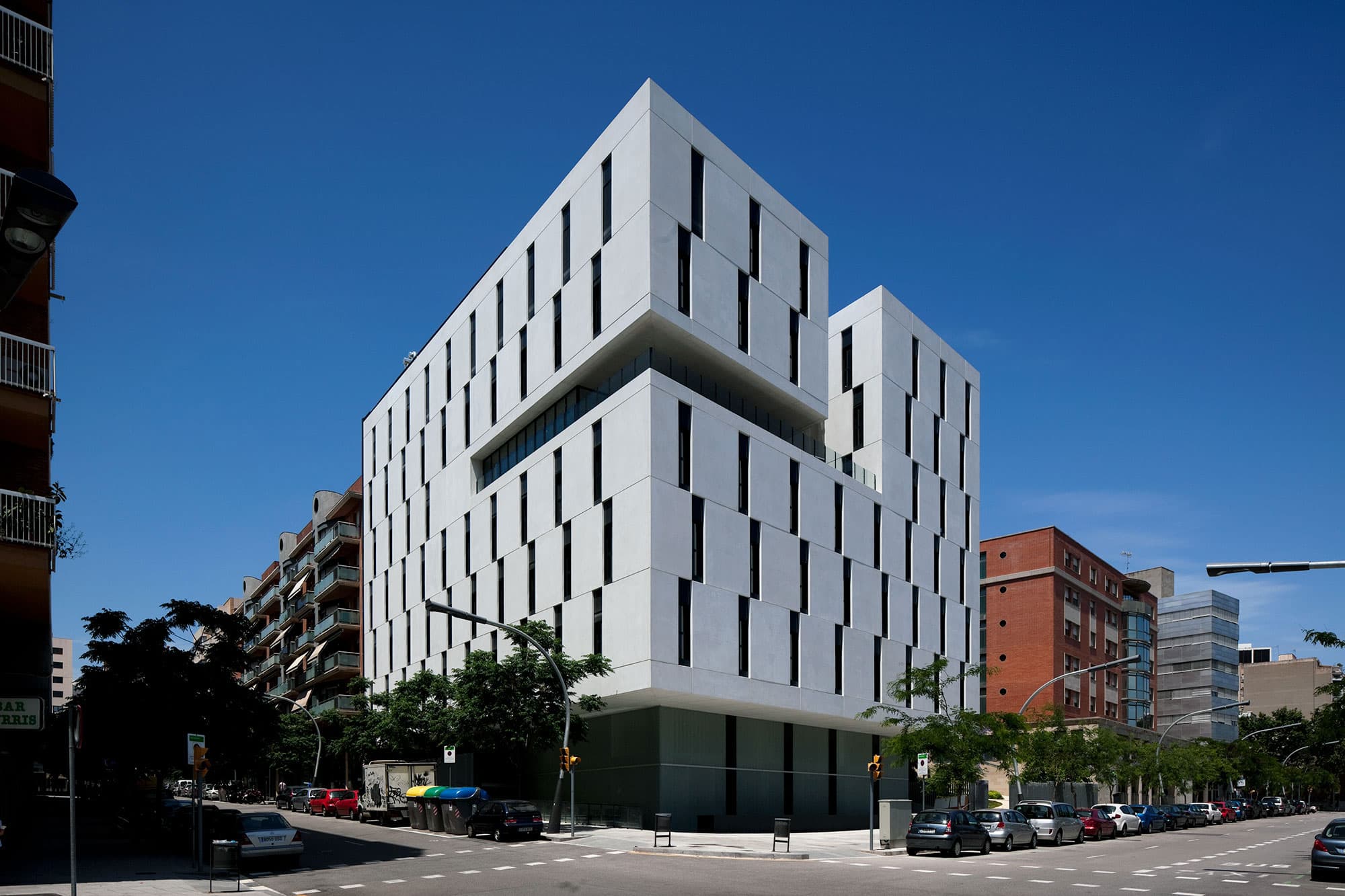 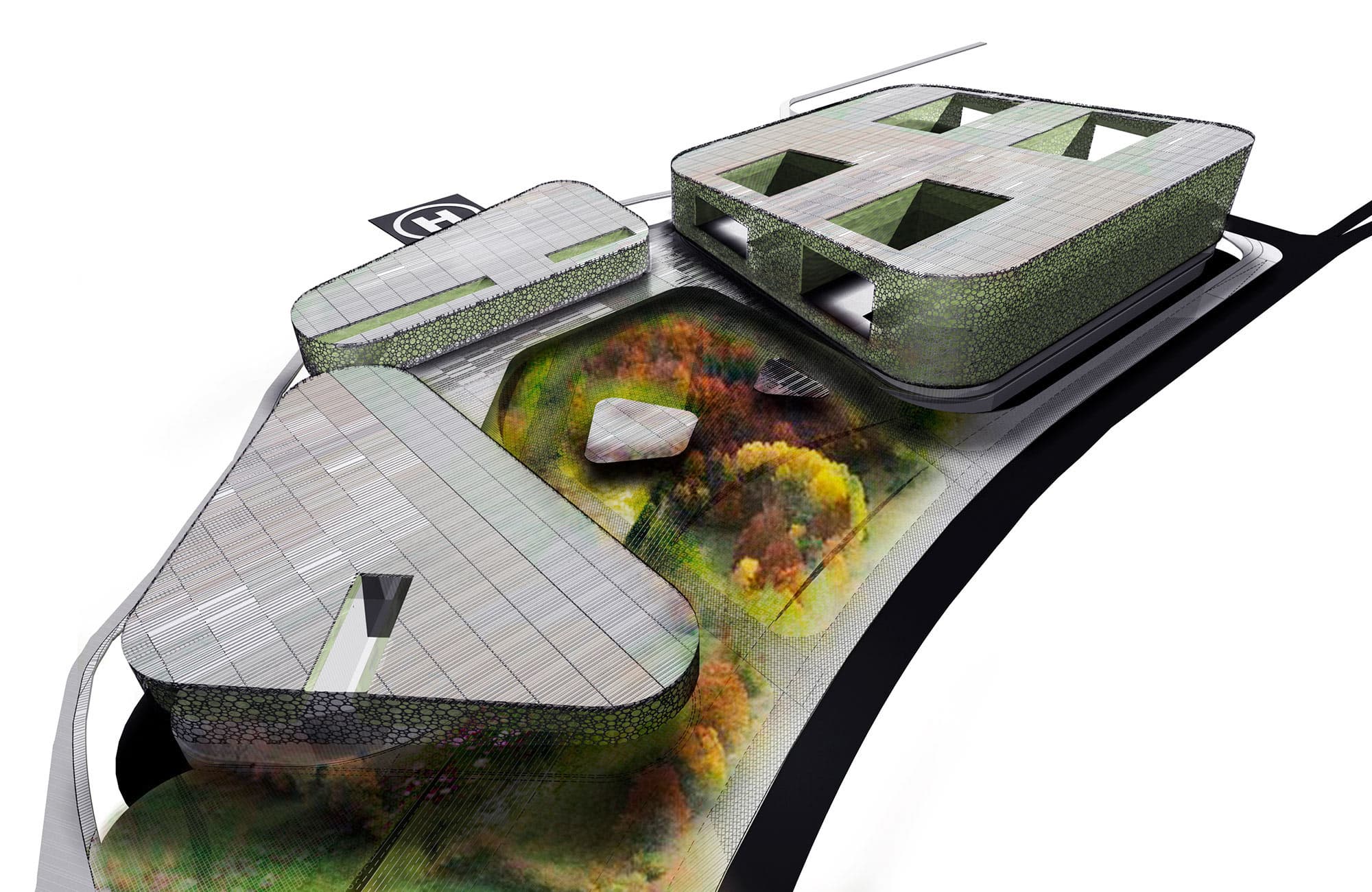