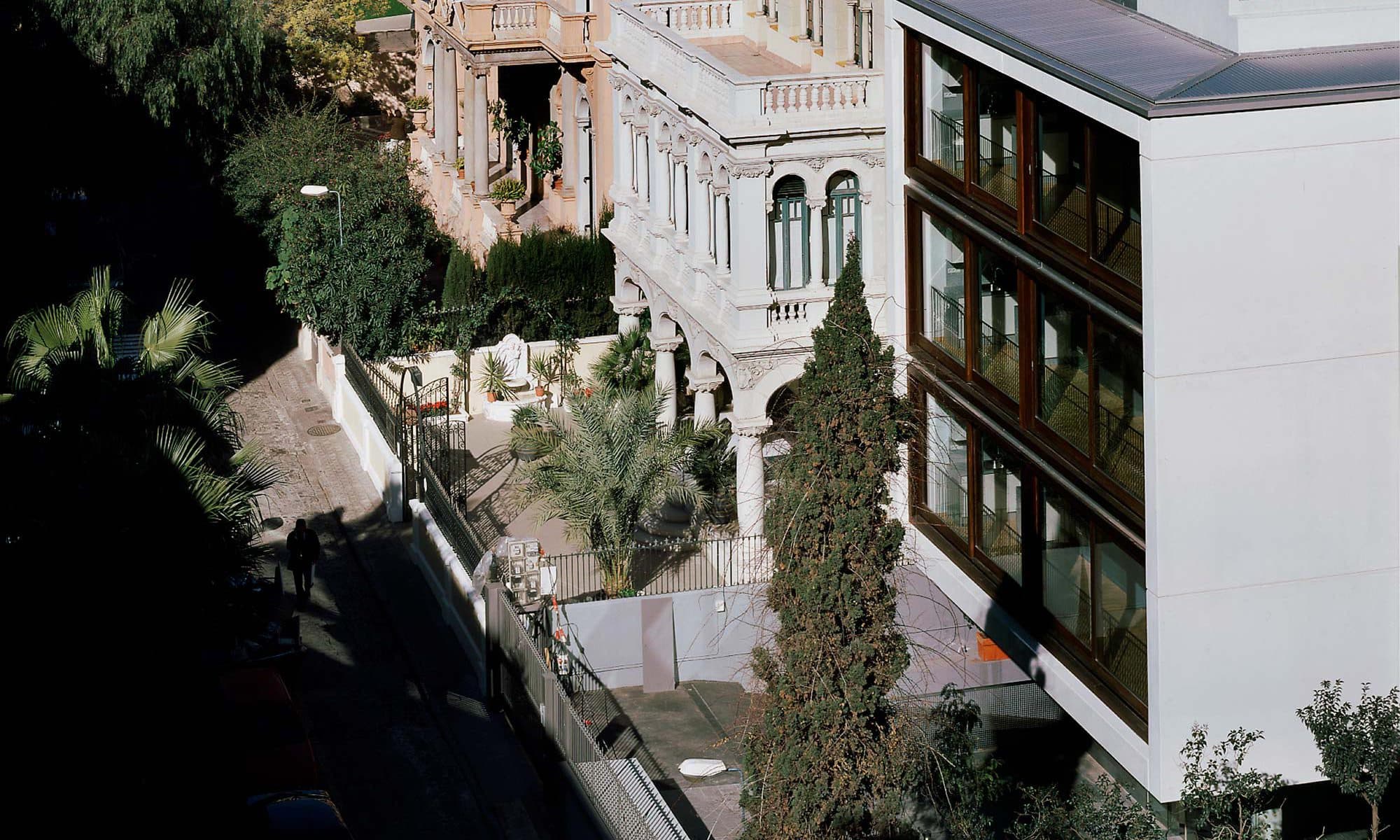 Built in 1868, Passatge Méndez Vigo is one of the most emblematic lanes in the Eixample, alongside Passatge Permanyer. Both of them represent the best examples of English-style lanes consisting of two-storey homes with large gardens. They are the only two lanes that have remained faithful to their original conception in terms of building height and style, as well as width of the street.

Plot number four in the lane had remained undeveloped for many years, so constructing a new modern building in such a special setting and fitting it into that context was a true challenge.

The formal design consists of a building that respects its surroundings: a simple, elegant, neutral volume. The building is defined as a cubic element that floats above the ground-floor level. A lightweight concrete box with two glass sides that is three storeys high and contains one home per floor.

The ground floor, with its continuous glass enclosure, is set back from the upper floor volume. Fully transparent and open to the outside, it contains the entrance hall. The exterior forms part of this space, finished with natural stone paving. The basement, located on the lower level, acts as a car park.

The ground floors share the same layout, which involves an open floor plan with views to the exterior on all four façades. A floor plan was proposed that would allow for various uses. The building’s rectangular floor plan has been arranged in three functional strips in which the spaces commence from the position of the vertical communications and services core that makes up the central strip. This passes through all the floors and contains the lift, staircase, bathrooms and remaining service spaces. Its presence is emphasised both internally and externally as a prism of dark grey stone.

And it thus reaches the rooftop, forming the stairwell and also housing changing rooms, toilets and providing access to the solarium terrace and longitudinal overhanging swimming pool on one of its sides. These elements are set back in relation to the rooftop occupancy to ensure user privacy and continuity of the lane’s skyline.

The view of the building from the lane is that of a floating volume of white concrete, glass and wood supported by a solid vertical element anchored to the ground. The four façades have been created with few materials: glass, concrete, natural stone and wood. Each of them is different, given that they respond to various needs or uses, but they all maintain a formal unity or compositional criteria.

The aim of the interior design was to reflect aspects of simplicity, continuity and enhancement of the central core.

It could be said that rather than a project, the real challenge was to incorporate it into a historical context that forms part of the city’s heritage. 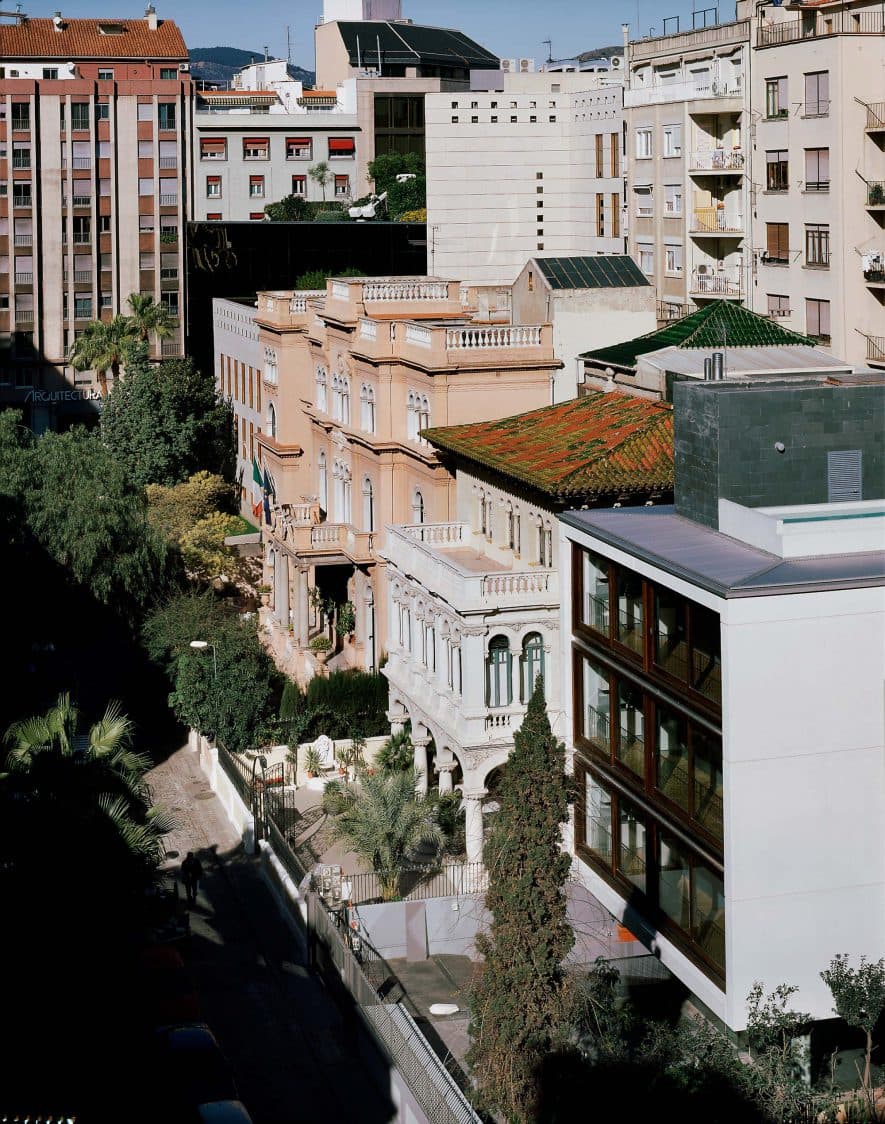 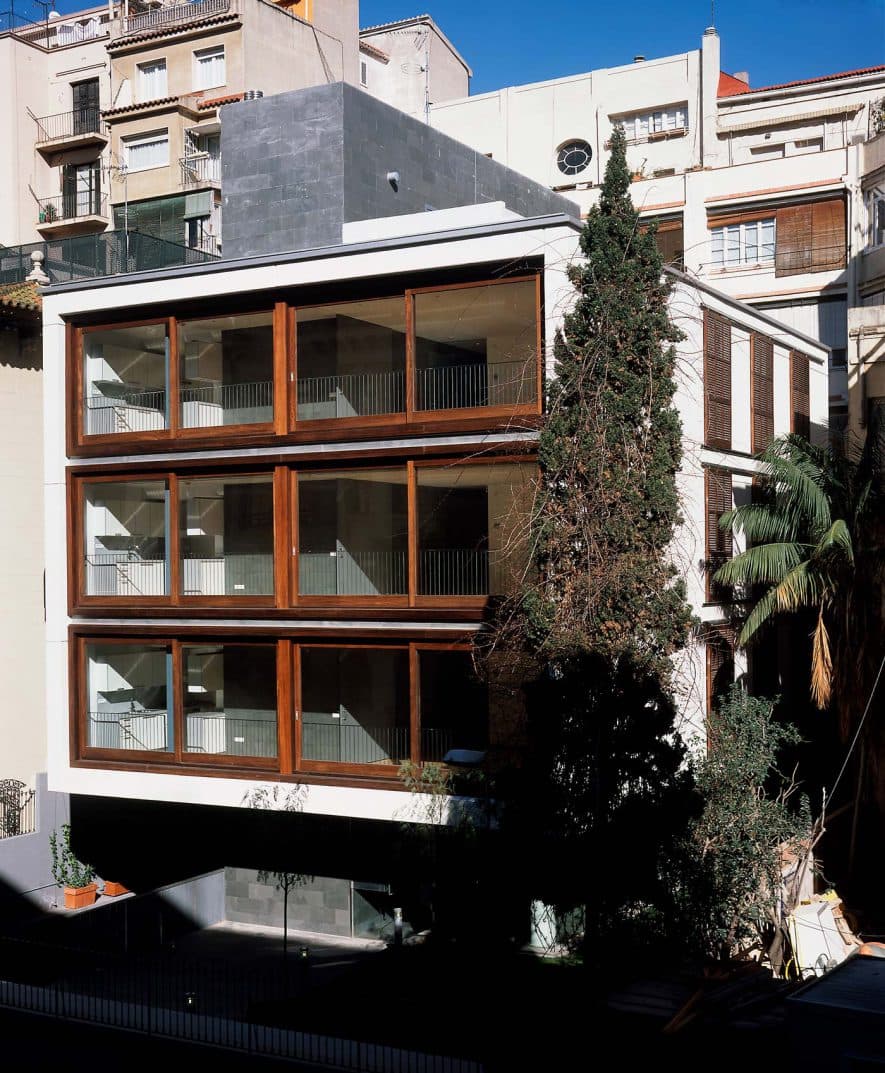 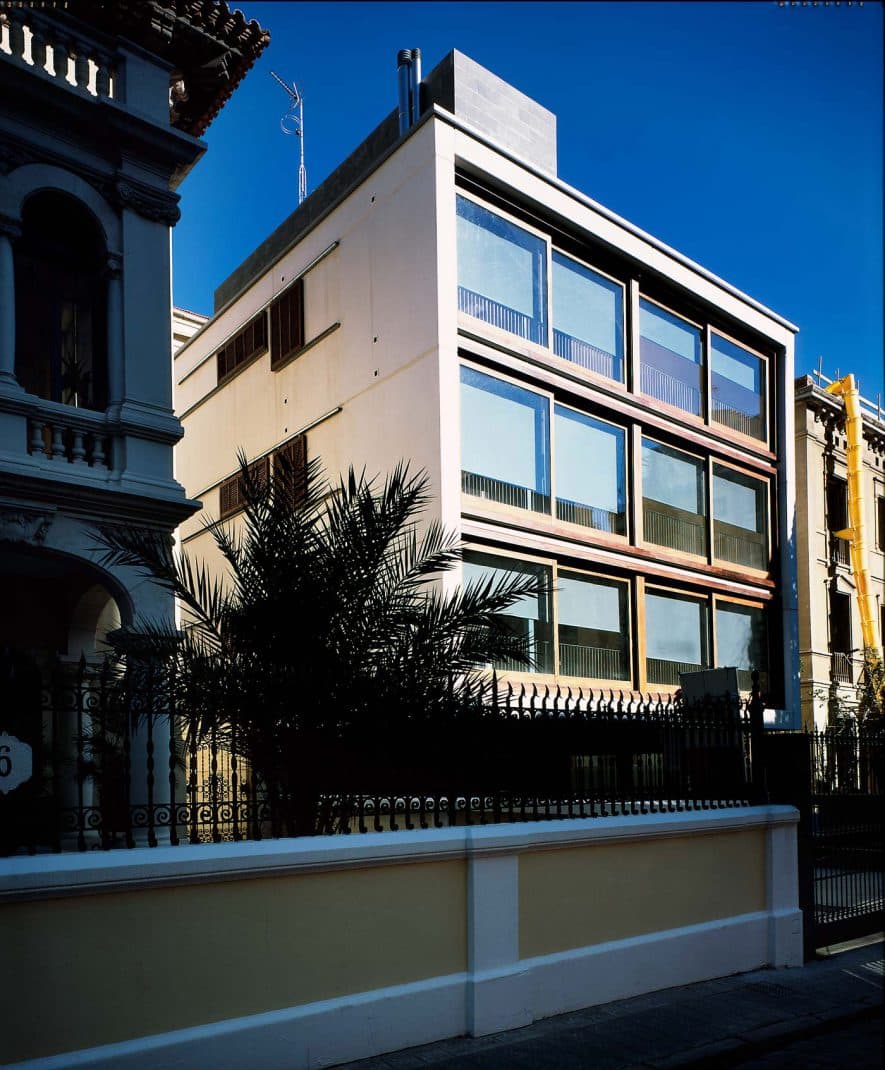 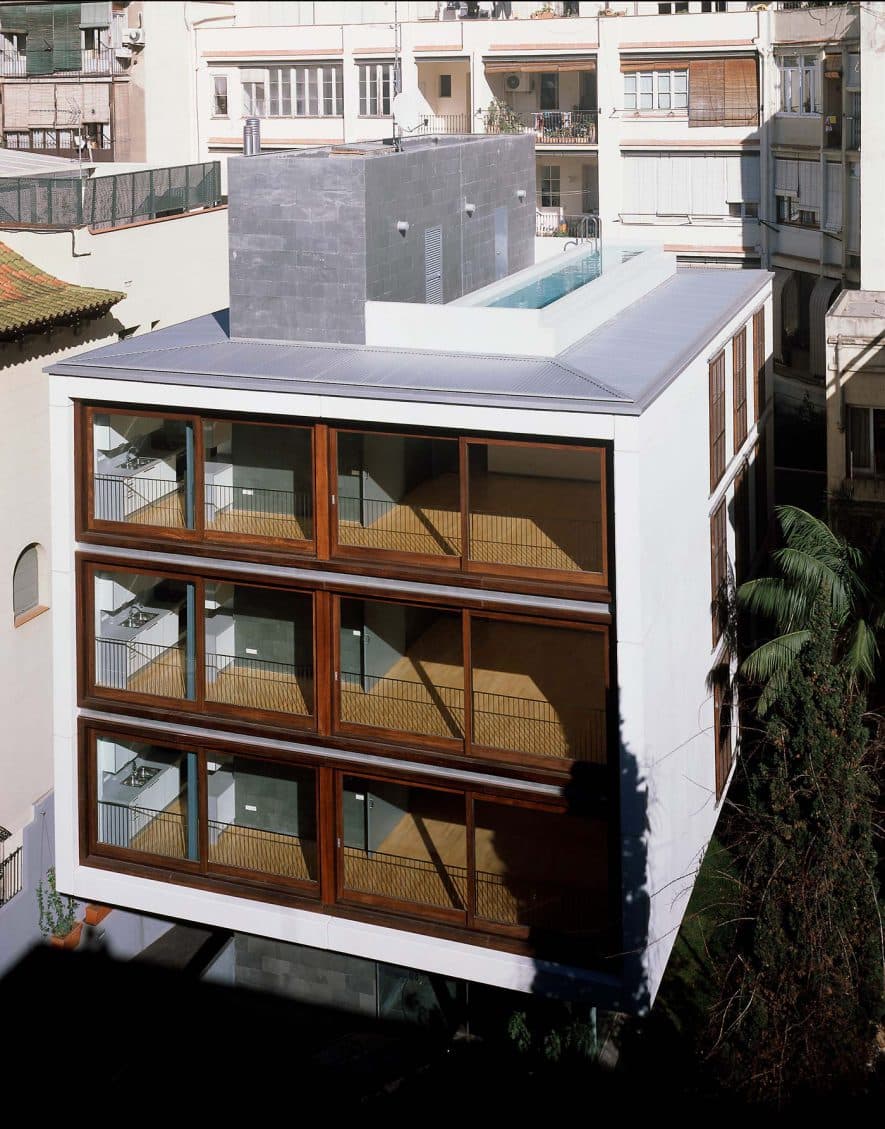 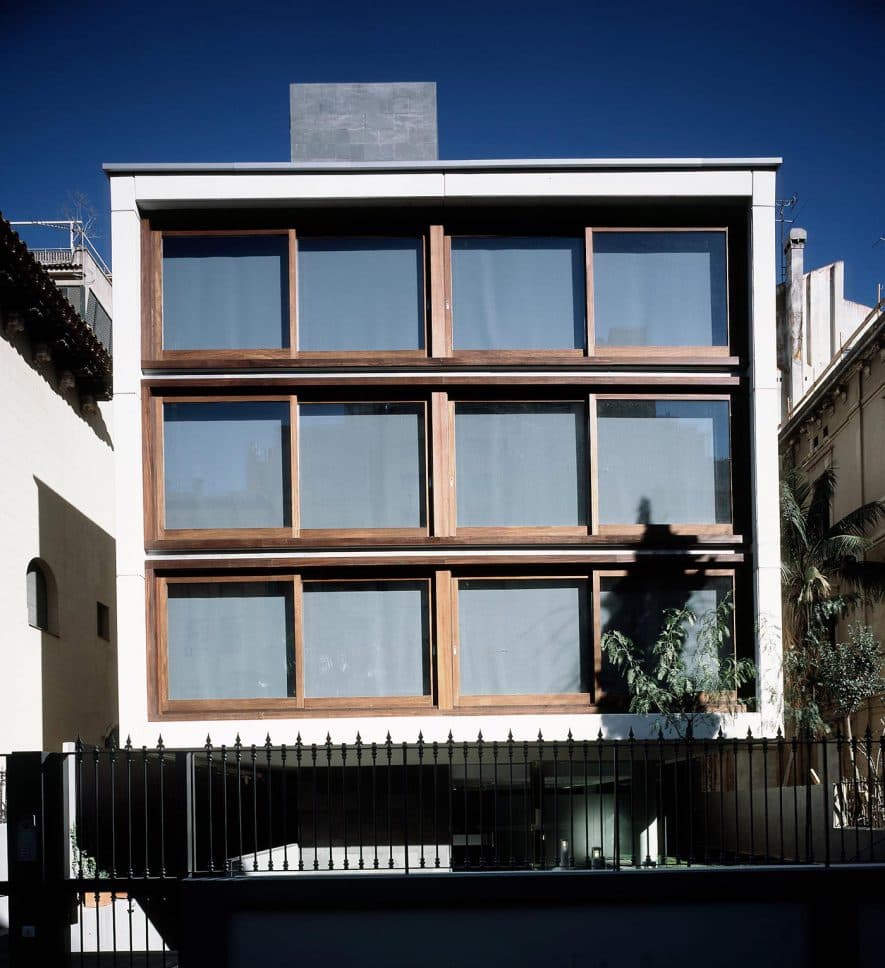 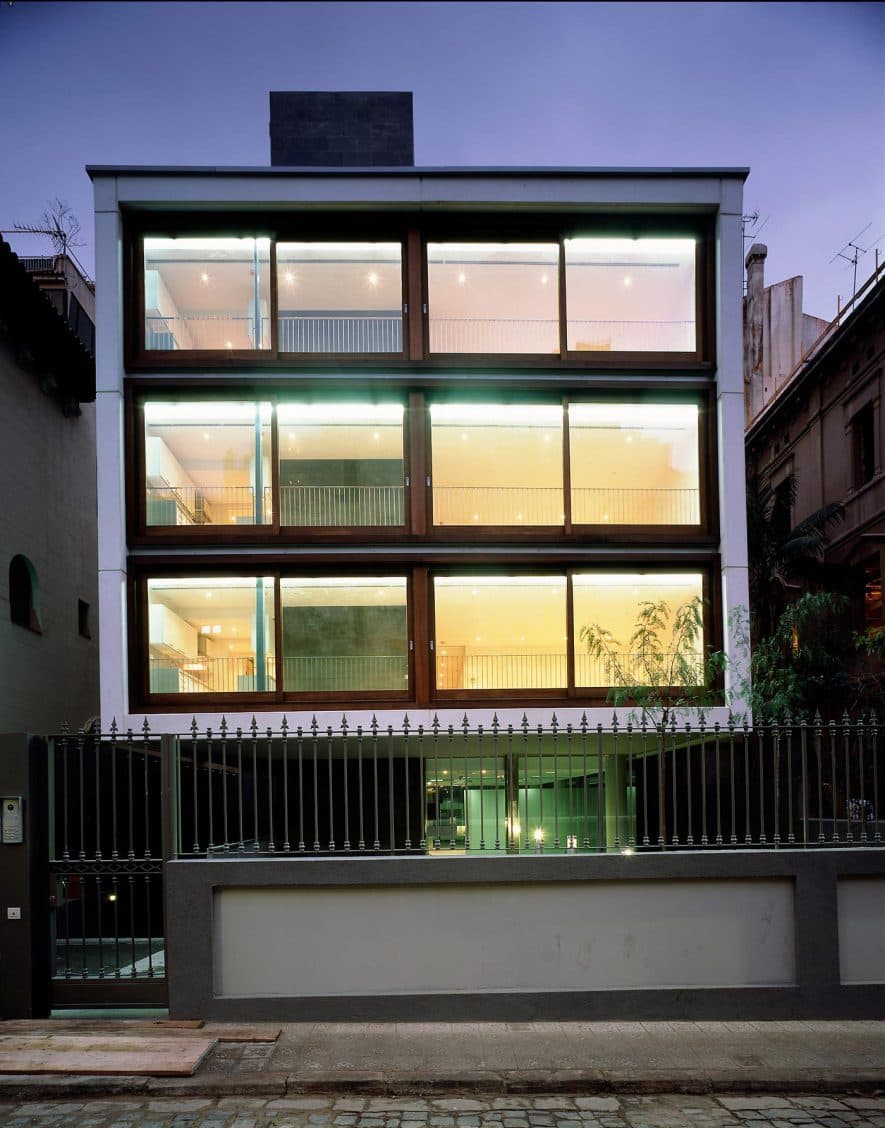 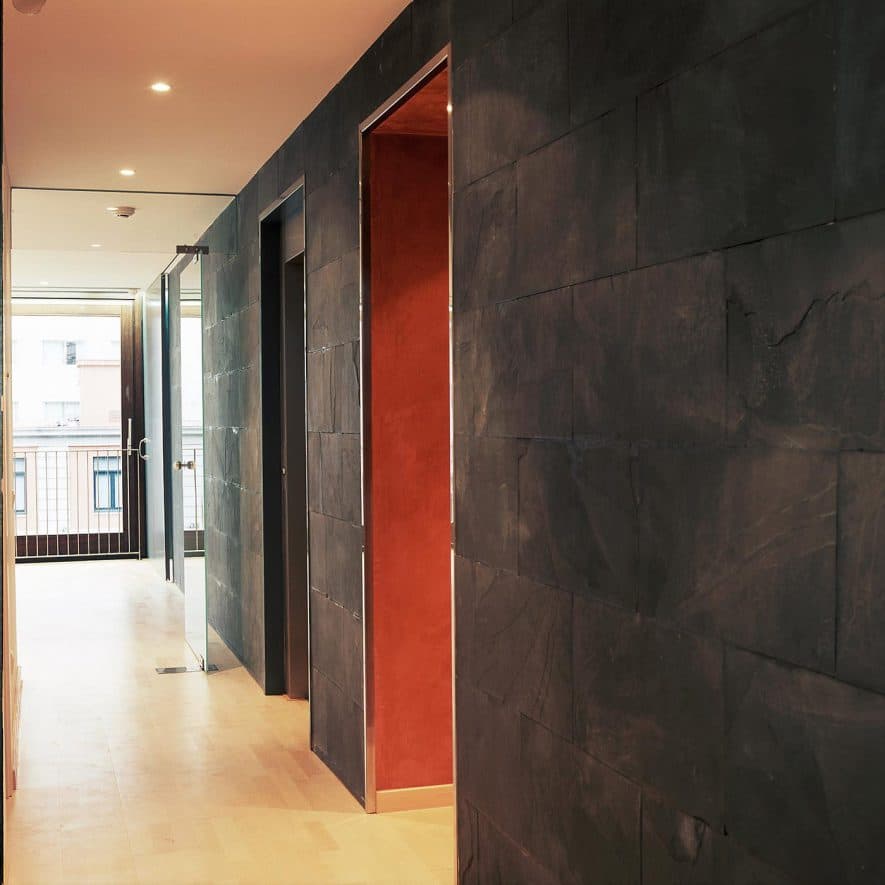 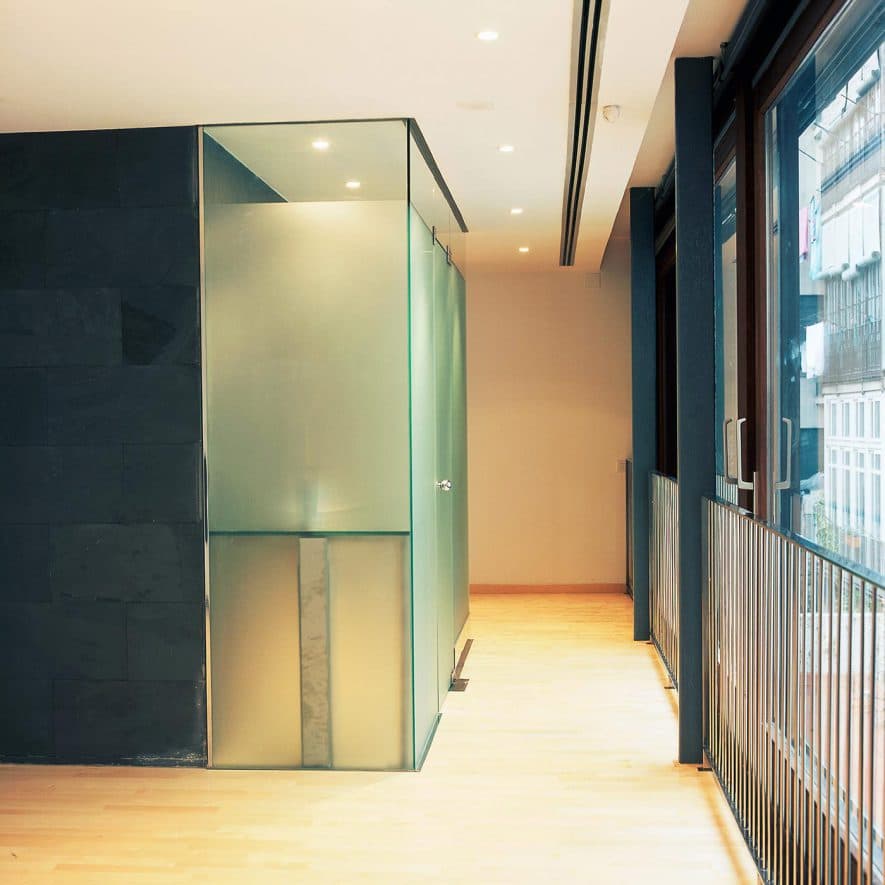 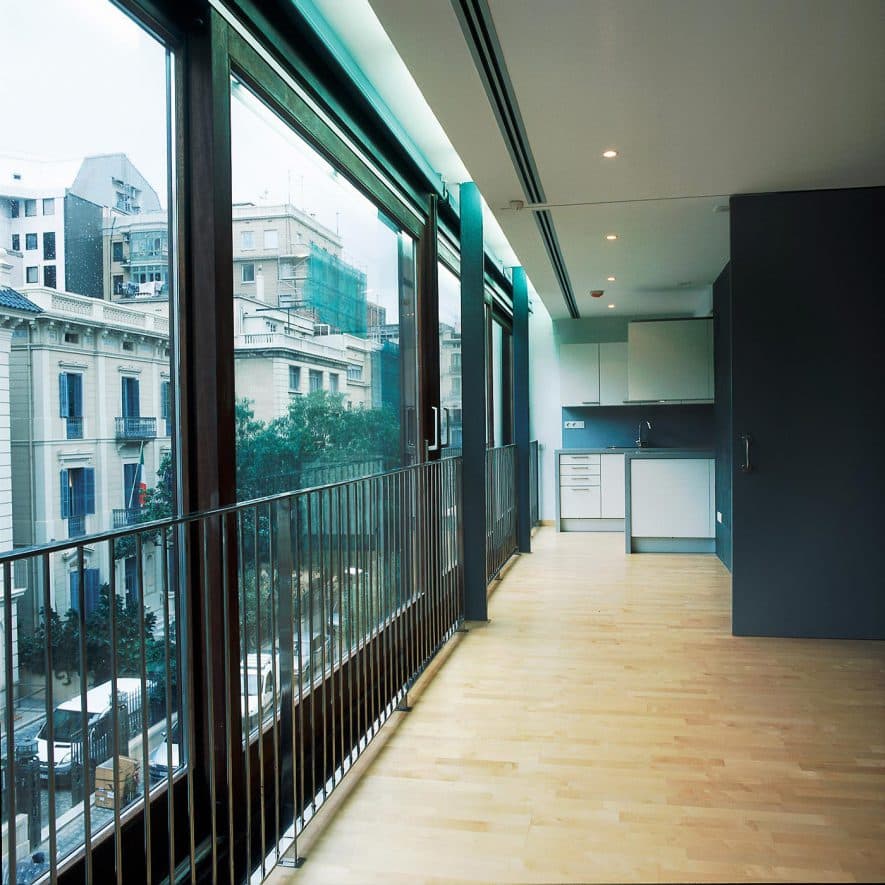 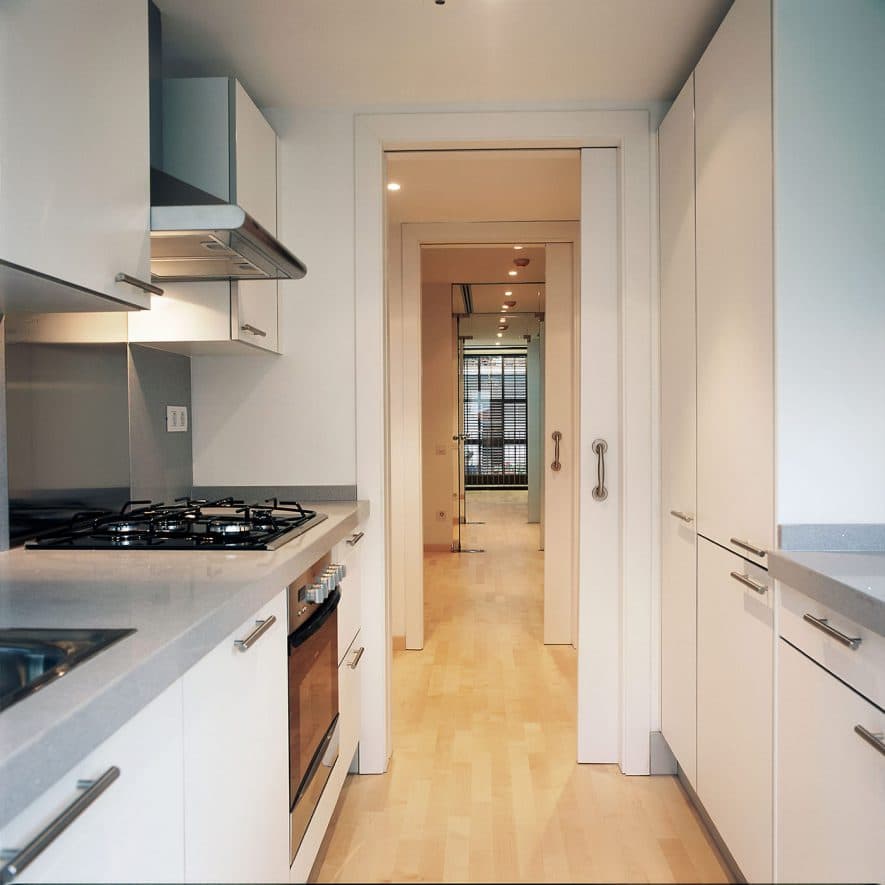 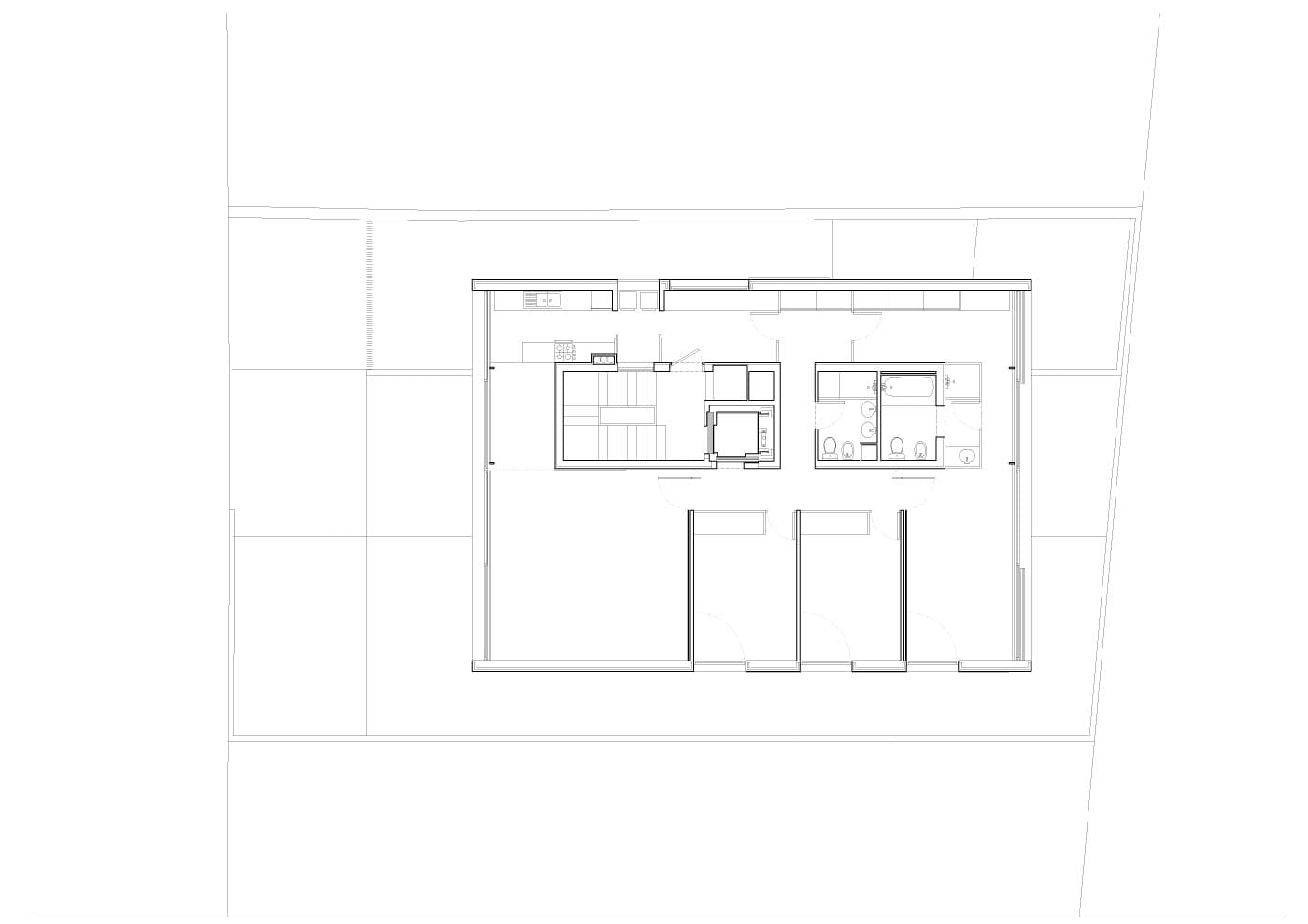 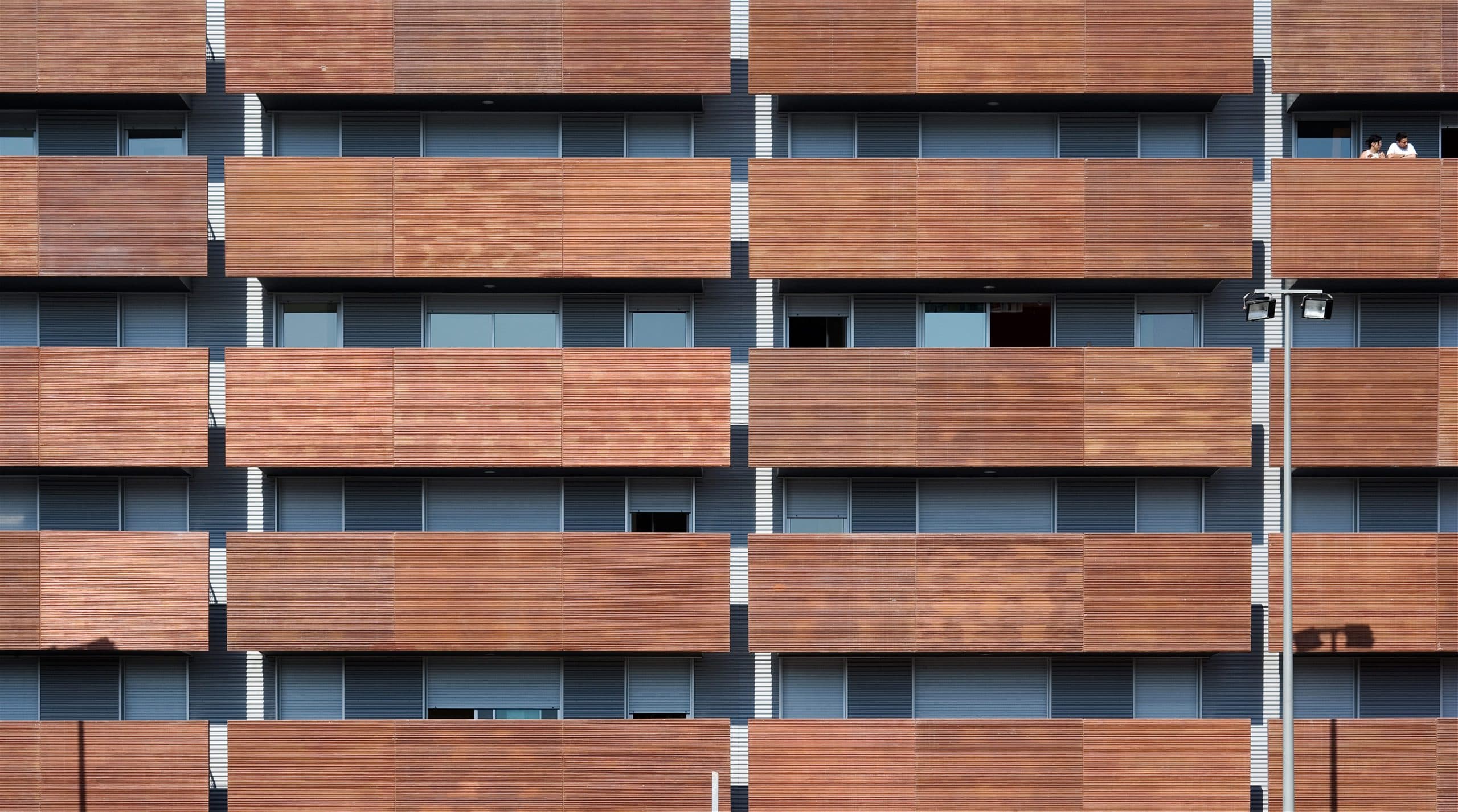 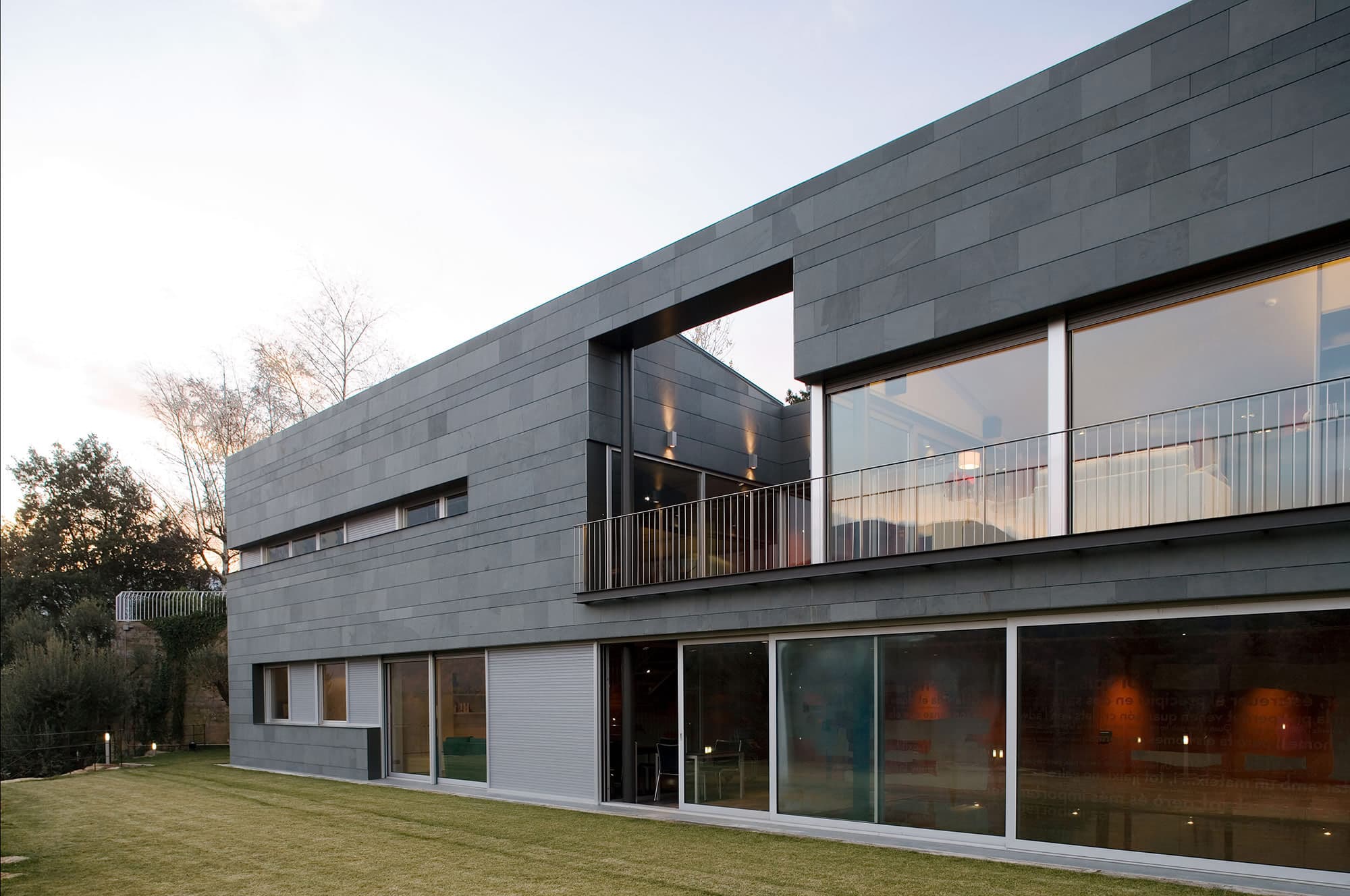